Paladero: A’s to your Q’s 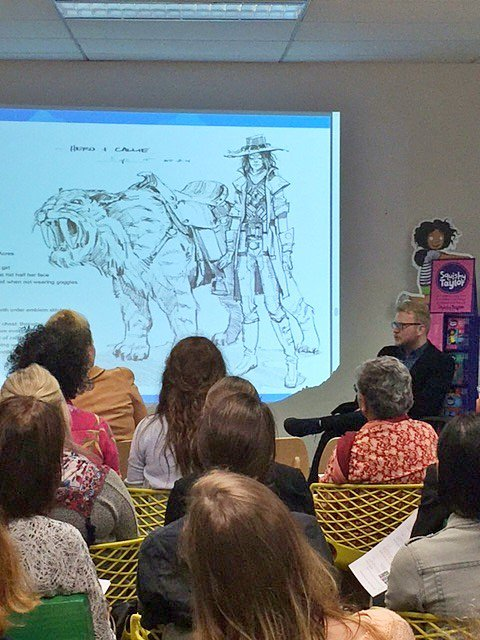 Much like winter, July is coming. As is the release of PALADERO: THE RIDERS OF THUNDER REALM. I recently had the opportunity to talk to booksellers about the series as part of Hardie Grant Egmont’s 2016 roadshows, and without too much preamble I present to you an overview of everything we discussed. Enjoy!

Can you tell us more about where this incredible world came from?

I originally created the Kingdom of Ai in 2007 as part of an entirely different novel. It was a contemporary fairy tale along the lines of The Neverending Story, featuring a brother and sister on a quest to find their missing father. Along the way they entered the strange territory known as Thunder Realm where they met a dinosaur-riding paladero by the name of Josiah Sarif, a Han Solo-type character who ended up being their bodyguard. I created the term paladero by combining paladin – another word for knight – with vaquero, the Spanish term for cowboy. This word rolled around in my brain for years, with the paladero character stealing the limelight from the rest of the characters.

After writing about a third of this novel, I shared it with my wife Simone and with HGE publisher Hilary Rogers. Both of them agreed that the story was trying to cover too much ground and that it would help to simplify things. I decided to focus on what I felt was the most interesting element; the paladeros of Thunder Realm and the character of Josiah Sarif. Where had he come from and what was his world like? I went back to when Josiah was a teenager known as ‘Joss’, and started all over again from there.

Tell us more about Joss, and what your inspiration for his character was. What makes him special?

Joss is a fifteen-year-old orphan from the island-city of Daheed, which was destroyed when he was very young in a similar fashion to Atlantis. The only survivor, he was taken in by an Orphan House on the mainland where he grew up dreaming of becoming a paladero and living his life out on the open ranges of Thunder Realm, where dinosaurs known as ‘thunder lizards’ roam.

Joss is a combination of influences. My original intention with him was to create a Marty McFly-style character, a bit of a troublemaking smart alec with an unerring sense of confidence. In working on the manuscript with my editor Marisa Pintado, we zeroed in on Joss’s nobler characteristics and ditched the more arrogant elements. Not only did this make him a more sympathetic character but also a more grounded one with a greater arc. While he’s brave in the face of danger and has an innate sense of justice, he’s still prone to doubt and fear. He keeps mostly to himself, and has to be drawn out of his shell by the other apprentices with whom he’s sharing his quest.

Tell us more about Joss’s brethren, who accompany Joss on the Way?

When Joss is sent on the ancient quest known as the Way to prove himself, he goes through a binding ceremony where he and the other hopeful apprentices (or simply ‘prentices’, as paladeros call them) are sworn to look out for each other. This makes them brethren, but it doesn’t necessarily make them friends.

All of Joss’s brethren are older than him, leaving him an outsider in more ways than one. What he doesn’t realise is that they themselves are outsiders, and that they’ll have to overcome their differences if they have any hope of succeeding.

I wanted to create a cast of characters that could each feel like the star of their own book. They all have their own secrets, their own backstories, and I hope that they’re diverse enough that there’s a character for almost everyone to identify with and count as their favourite.

What makes fantasy great reading, especially for this 8+ readership? Where do you see this book sitting on the shelves?

Fantasy and Middle Grade fiction overlap in many ways, with both having strong themes of discovery and coming of age. What makes Fantasy especially great for this age range is that it’s a genre that’s entirely preoccupied with storytelling. Everything has a history, everyone has a tale to tell. There are stories within stories, ready to engage and excite the imagination. It also helps that there are captivating landscapes, thrilling action sequences and, in this case, dinosaurs.

As far as where PALADERO is likely to be shelved, we were discussing this the other day and it was pointed out that ‘Lochran’ sits right next to ‘Landy’. While I’d never presume to say I’ve accomplished what the SKULDUGGERY PLEASANT series has done, I think PALADERO would easily appeal to the same kind of reader as it’s a little bit thorny, it’s a little bit challenging, but it’s still also a lot of fun. I’d also go so far as to say that, if a parent of teacher came in looking for what to recommend to any STAR WARS or JURASSIC WORLD fans who may be a little reluctant on the reading front, PALADERO would make for an easy sell.

How do you manage a demanding job and the intensity of writing a series?

There’s this myth that a writer needs huge slabs of uninterrupted time to get anything worthwhile done. The truth is, if you train your brain to do it, you can get a lot accomplished in 10-20 minute bursts. That’s not to say that a day spent totally absorbed in your manuscript isn’t appreciated. In fact, the closer I get to deadline (and over it) the more weekends I need to spend doing that. But that’s a luxury, and one that not many people can indulge in with work and family commitments.

If all you can spare is 10 minutes to write down as little as 100-200 words, you’d be surprised at how quickly those words accumulate into a novel. A lot of this book has been scribbled out in notebooks over a coffee, then written up and revised late at night or over a weekend. And I can’t count the amount of long car trips I’ve spent daydreaming about where next to send Joss in Thunder Realm, all set to an appropriate movie score or ambient soundtrack that keeps me from getting distracted.

And lastly, perhaps you could tell us what’s next for the Paladero series.

I’ve just handed in the first draft of Book 2, and I can say that many of the questions about Joss’s past that are asked in the first book will be addressed in the next one. We’ll be delving a lot more deeply into his history, as well as that of his brethren Ganymede Drake’s, all while learning more about the dark conspiracy that’s working away behind the scenes that could spell doom for them all.

Steven Lochran is the author of the upcoming Middle Grade Fantasy series PALADERO, as well as the teen superhero series VANGUARD PRIME. He lives in Melbourne with his wife, two cats, and an unreasonably large toy collection.
View all posts by Steven Lochran »

Posted on February 29, 2016, in Uncategorized. Bookmark the permalink. Leave a comment.