← Babes in Toyland
Notes from a Wayward Writer →

Life in a Nutshell

Life has been keeping me pretty busy lately, so I haven’t been able to post in a while. Sorry about that!

I’m currently knee deep in the edits for Vanguard Prime Book 3 (aka War Zone), which is still on track for its September release…so long as I don’t slack off! I’ve also been out and about promoting Wild Card, doing a couple of interviews as well as some events. I got the chance to talk to kids’ book club at The Younger Sun bookshop, which was a lot of fun and very insightful.

A week later, I had an event with Eltham Bookshop. This was the second event I’d had with the store, and the kids were just as bright and engaged as they were the first time around. One Vanguard Prime reader, Elliot, even brought along a drawing he’d done of Goldrush and the Knight of Wands, which he not only gave me permission to share here but also very generously let me keep. Thanks, Elliot! 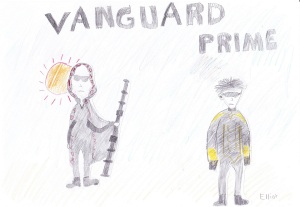 To make sure I didn’t rip him off, I traded him a signed piece of cover artwork. Hopefully he liked it!

My wife and I are heading off on an overseas trip soon, so my blogging may get even more sporadic. I’ll do my best to keep you posted, provided my fingers don’t fall off or I’m struck suddenly and thoroughly blind.

And now I need to find some wood to knock on.

Steven Lochran is the author of the upcoming Middle Grade Fantasy series PALADERO, as well as the teen superhero series VANGUARD PRIME. He lives in Melbourne with his wife, two cats, and an unreasonably large toy collection.
View all posts by Steven Lochran »

← Babes in Toyland
Notes from a Wayward Writer →