Another weekend has ended, another week has started, and another event is done and dusted.

The signing at Dymocks Southland turned out to be a lot of fun. I had a table set up at the front of the store and got the chance to chat with people as they came in. Quite a few people who’d never heard of Vanguard Prime before walked away with a copy of the book (signed, of course!), and even better than that was all the support that was expressed for Aussie authors and the publishing industry in general. Thanks so much to store owner Jerome for the opportunity! If you guys get the chance, make sure to drop by the store and check it out.

Vanguard Prime: Goldrush has had three more reviews this week, the first (and worst) of which was written by…well, me. Let me explain. You see, in addition to being an awesome writer, Jack Heath is also really supportive of new authors. After I mentioned how influential Third Transmission was in the writing of Goldrush, Jack got in touch with me and we ended up hanging out. What a nice guy!

Cut to last week, where (or should that be ‘when’?) I got an email from Jack saying how he was asking various authors if they’d be interested in reviewing their own books, much as he did for his latest book, Dead Man Running. It was a daunting challenge to say the least, but one that I couldn’t possibly turn down. It proved to be a struggle, trying to walk the line between honest self-analysis, neurotic self-flagellation, and blatant self-promotion. Hopefully you’ll agree that I struck a decent balance.

A far more glowing review came from Vic and her blog, Mummy Ate Me. Any review that starts off with “I LOVED this book!” always heads straight to the top of the pile of favourite reviews. But! Vic may have been beaten out by the third and final review I received this week. This one came from 9-year-old Ethan, who actually took the time to do a review of Vanguard Prime: Goldrush…in diorama form! Thankfully, Ethan sent through some pictures and has given me permission to share them here.

For those who can’t make out what the text says, Ethan also generously provided a typed-out version. It says; “The Vanguard Prime team lives in a aircraft carrier with a prison on board and lots of aircraft. The characters of Vanguard Prime are super heroes. My favorite character is Ethan or the Knight of Wands. My other two favourites are Goldrush and Machina. The last of them is Agent Alpha, Gaia and Major Blackthorne. My favourite power is Machina’s. She can control technology. The bad guy is really hard to beat because stuff with his mind. His name is the Overman. Another is called Cronus and he is strong. He has a helmet with a horn.”

I honestly don’t think I could have summarised the book better myself.

If that wasn’t cool enough, Ethan also sent through the very first piece of fan art I’ve received! You may notice that the diorama contains an illustration of the Knight of Wands, but in addition to that Ethan provided this drawing of Goldrush; 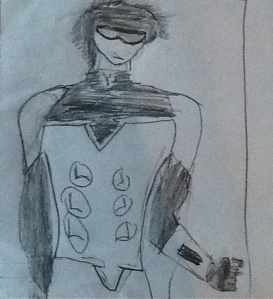 Very big thanks to Ethan; it’s reader mail like this that keeps authors writing! And if anyone else out there has some Vanguard Prime art they’d like to share, make sure to send it through (along with what name you’d like it credited to) and I’ll post it here on the blog.

Steven Lochran is the author of the upcoming Middle Grade Fantasy series PALADERO, as well as the teen superhero series VANGUARD PRIME. He lives in Melbourne with his wife, two cats, and an unreasonably large toy collection. View more posts